Once again we see that Democrats in Congress will go to any lengths to prevent the truth from getting out about the Obama-care health care bill now in Congress. Proof once more that Democrats care nothing about the American people or solving their problems, they care only about controlling us.

Roll Call has the low-down on these devils and their efforts to keep the voters out of the loop: 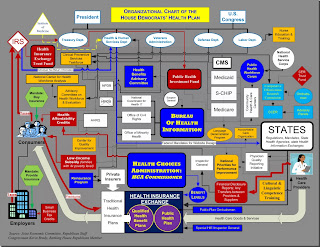 Democrats don't want you to see it because it shows just how screwed up the health care plan really is. It is a bureaucratic nightmare of huge proportions.

Democrats are preventing Republican House Members from sending their constituents a mailing that is critical of the majority’s health care reform plan, blocking the mailing by alleging that it is inaccurate.

House Republicans are crying foul and claiming that the Democrats are using their majority to prevent GOP Members from communicating with their constituents.

The dispute centers on a chart created by Rep. Kevin Brady (R-Texas) and Republican staff of the Joint Economic Committee to illustrate the organization of the Democratic health care plan.

The flow chart resembles a game board designed up by some crazed, uninformed, Liberal politician (which of course it was) with a maze of arrows and colored blocks, each of which represents some bureaucratic hurdle consumers must overcome before they receive treatment.

I doubt very seriously the famous cartoonist Rube Goldberg could have designed anything more complicated...or ridiculous.

Here's a clue to you Democrats out there. No matter how much you wish it were so, the federal government has never accomplished anything better, more efficiently, or cheaper than private enterprise...NEVER!!!

Given that undeniable fact; proven over and over again, why on Earth would anyone look to our federal bureaucracy to solve a problem as complex, far reaching, and intrusive on the individual's privacy as health care?

One can only surmise that it derives from profound and over-arching stupidity. Certainly there appears to be enough of it to go around within the Democrat Party; beginning with our current president and the majority leaders in both houses of Congress.

Well, I'm doing my little part to get the message out to Republicans and all American citizens. With the web and all of the alternate news sources it has, Democrats will fail in this effort to censor Republicans in Congress and once more prove that they oppose the free flow of information of value to their own constituents.