Will Malven
5/05/2011
Note:  I had thought that my post, Bin Laden Aftermath would be my final word on the raid, but I find that, as more is revealed, more questions continue to arise, so here we go again . . . sort of.  WM
Question:  How can you trust anything a person says, if they routinely lie?
Answer:  You can’t.
Today The Daily Telegraph reports that CIA Chief Leon Panetta has revealed that the President did not watch the raid on Osama bin Laden’s residence go down from the White House Situation Room as was reported Monday by all of the MSM.  Moreover, he revealed that the President could not have watched the raid as it was happening, because they experienced a 25 minute blackout of the video feed from the assault group.
On May 02, CNN Tech reported:
Obama watched live video of bin Laden raid, U.S, official says
May 02, 2011 |  Mark Milian, CNN
As special-operations military troops prepared for a firefight about 7,000 miles away, President Barack Obama entered a room in the Washington area early in the afternoon on Sunday to follow along.
------------CUT--------------
"We were able to monitor on a real-time basis the progress of the operation, from its commencement, to its time on target, to the extraction of the remains," Brennan said. "We were able to have regular updates to ensure that we had real-time visibility into the progress of the operation."
The White House and Central Intelligence Agency didn't have access to a live audio feed, but they were able to tap other communications, a U.S. official told CNN. There was some live video, though the official declined to elaborate on the nature of that footage.
While it is not explicitly stated, the clear impression left by John Brennan’s comments, especially when accompanied with the picture of a rapt President surrounded by his Foreign Policy and Intelligence staff, was that they were following the proceedings with a live feed. 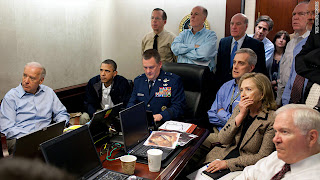 Even Mark Milian, the author of the piece expressed that belief:
“Like a page plucked from a Hollywood screenplay, Obama and other principal coordinators for the mission that killed Osama bin Laden convened in order to remotely monitor the situation . . .”
This incorrect impression wasn’t unintentional, it was a deliberate attempt by the White House to leave the American people the impression that the President and his staff were directly involved in every minute detail of the raid.
. . . and therein lies the problem with this President and this Administration.  Nothing they say, nothing they claim, can be taken at face value.  They are posers and dissemblers.  Everything they do is carefully scripted and controlled to leave the observer with the impression that there is more substance than actually exists.
It would have been the effort of a moment for someone in the White House Communications staff to issue a clarification that, while the President was not able to observe the actual raid, he and his staff were regularly updated, as they sat in the Situation Room, with the status of the raid as communications allowed.  But, rather than clarify the error of perception, they built upon the initial reports with what now appears to be a posed photograph of a rapt and haggard President and staff watching the screen as the raid progressed.
Perception is reality in a nation consumed with 24 hour live news feeds and broadband in every house.  With a White House in pretty much constant campaign mode—it was revealed yesterday that the President’s campaign just bought the domain name “Gutsycall.com—every comment and every picture is intended to convey the message of a President in charge and in control.
There are no “accidents” when it comes to public impression as far as this White House is concerned.  The deception was intentional and deliberate.
The deception also feeds the constant current of conspiracy theories that have now become part of our culture.
After 9/11, we had the “truthers” who were and are still convinced that the attacks on 9/11 were staged by the Bush Administration and that the collapse of the World Trade Center and the collateral damage that resulted, could not have occurred as the result of two passenger jets crashing into the side of the two towers.  The level of hatred for President Bush, the sheer lunacy of the claim, and paranoia required for one to believe such nonsense is truly mind-boggling, but it still exists and a shocking number of Americans still believe that President Bush ordered the killing of 3000 Americans for some nefarious political reason.
Then came the “birthers,” those who were convinced that President Obama was born somewhere other than in Hawaii and that, because he was therefore not a “native born citizen” as required by the Constitution, he was ineligible to be President and, for that reason, not legitimate.
The initial reaction from the President was to release a Certificate of Live Birth, a compelling, but not exclusionary piece of evidence that left room for doubt in some.  Then the White House chose ridicule over debunking and obfuscation over revelation.  They spent millions of dollars fighting to prevent anyone from accessing the President’s original long-form birth certificate or any of his scholastic records.
Rather than simply providing the documents necessary to answer the outstanding questions, they chose to fight against those revelations—something they continue to do to this day.
Finally, the President released his long form birth certificate—apparently because the “birther” questions had become mainstreamed, primarily through the efforts of Donald Trump, and Obama’s poll numbers were beginning to run dangerously low.
Now, because of this White Houses penchant for telling lies and half-truths, there are the “deathers.”  Those who are convinced, beyond a shadow of a doubt, that Osama bin Laden was variously, still alive, killed a decade ago but never announced, taken prisoner but announced as killed, and any one of a number of parallel conjecture.
As Sir Walter Scott sagely told us:
“Oh! What a tangled web we weave, when first we practise to deceive.”
This White House would get on so much better if they were more open and honest—something the President promised us all when he ran for the office.  This “most open and transparent administration in history” has turned out to be the most tight-lipped, obstructive administration in recent history, with more rejections of Freedom Of Information Act requests in a shorter time than any previous administration.
Of course part of the problem lies in the fact that this President’s agenda is anti-capitalist, anti-liberty, anti-Constitution, and anti-American.  In his case, honesty would not be the best policy; it would be the end of his Presidency and of his Party.
Liberals cannot reveal their true agenda, so they pretend to believe in the very aspects of our society against which they routinely act and legislate.  That is the quandary in which the Democrat Party finds itself; they can’t tell the truth so they lie even as they pursue that agenda.
When facts are rare, people will fill in the blanks and in President Obama’s case, those blanks are being filled in, for many, with conspiracies.
When you can’t or won’t tell the truth, you have to expect people to make assumption that are not always true.  When your dishonesty is echoed through the complicity of a press corps that acts more as an advocate than as a skeptical critic, then conspiracy theories begin to appear rational.
Long Live Our American Republic!!!
Posted by Will Malven at 8:43 AM