The Obama Administration's Opinion of the Consitution

Never have I seen a more apt or accurate painting than Jon Naughton's "Forgotten Man."  It is the most accurate illustration of Obama's absolute and complete contempt for our Constitution I have ever seen. 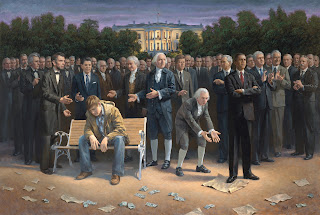 President Obama standing on the Constitution as Clinton, FDR, and Teddy Roosevelt applaud.  Madison pleads for Obama to stop as Washington and Jefferson gesture towards everyman citizen on the park bench and Lincoln looks on in horror.   The other former Presidents carry grim looks on their faces (on the right and center) while the left looks pleased.
A perfect depiction of what the political spectrum believes.  Oh yeah and lest we forget Obama's political roots, we should remember this picture of one of his political mentors and the ghost writer of his "autobiography"--Bill Ayers. 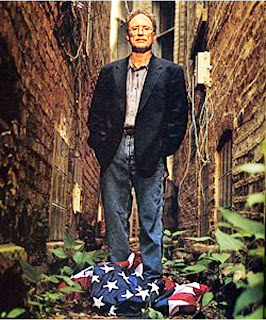 Men like these have no business running our government.  They have as much contempt for the average American citizen as they do our Constitution.  These are the "useful idiots" of whom the Soviet Union used to speak.  If they do not become the Joseph Stalins of the nation, they will be the first to meet the firing squads of the Marxist regimes they seek to establish.
If you believe in freedom, if you believe in liberty, if you believe that you should be the person in control of your life and your propery, then you must oppose these men, their Democrat Party, and their radical, destructive agenda.
Long live our American Republic!!!!﻿
Posted by Will Malven at 6:18 AM